In my previous story about De Akker, I mentioned the fact that many Stellenbosch stories and friendships start right here in the heart of our town. On one such a day, we met Vusi Kama.

” To those who can dream, there is no such place as far away.”

In the year 1966, Vusi Kama was born in Kayamandi, Stellenbosch. As little schoolboys, they always had a milk bottle to play touch rugby during break time. They all had their heroes. Sometimes it was the All Blacks, sometimes Morne du Plessis. The teams playing against each other had names like the “Wallabies” or ” Dagbreek”.

One of his rugby memories was the day he first set foot on Newlands Rugby Stadium. He loved it, but never dreamed or would have known that he would get involved with rugby ever!

The next part of his journey would lead him to Rhodes University, where he studied Journalism. These studies prepared him to understand the media, how to handle questions. In 2001 he became Media Manager for SA Rugby.

“Rugby is the closest you get to going to war.” – Will Carling

During the game, the players look out for each other, and you help your mate, you fight for possession of the ball. The management behind the scenes was in a different game, but it also felt like going to war. Vusi explained that he understood that the media is a vital part of the game as a spokesperson. They and the public see the team as a national treasure, and they want to give advice and know everything about the game plan, about the players. He had to keep a balance between the people, media, players and management. With the correct word and attitude, he had to organize peace!

During his period with the Springboks, he had to organise and attend press conferences on Mondays, Wednesdays, Fridays and after the game. After the games, there were always official media conferences. Some interviews went well, others not. In July 2006, the Springboks lost against Australia in Brisbane during Tri-Nations. This 49 – 0 score, was the second-worst loss in SA rugby Union’s 100-year history. It was during a media conference like this when Vusi had only 15 minutes to write a report, check the content before the newspaper got it!

During tough times like this, he and the whole team had to “bite the bullet”. They all had to endure this painful lost! The show must go on, and you must do your job as best as you could under the circumstances.

” Champions aren’t made in gyms. Champions are made from something they have deep inside them – A desire. A dream. A vision. “

This desire to win, to fulfill their rugby dream, to have a vision, is exactly what the players took to the Rugby World Cup in 2007. The whole preparation for getting ready to go to France was a memorable experience for Vusi as well. He got to know the players so well. Sometimes he would have a pleasant conversation in Sesotho with Bismarck and Jannie du Plessis. Other times he would so much enjoy it when Ricky January or Butch James are telling jokes. 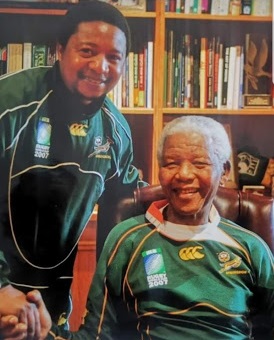 Before going off to the World Cup, it was traditional to go to Nelson Mandela’s house to get his blessing, but at that time he was already in France. The players and Vusi met him at a banquet hall and Vusi can remember that Madiba’s first words were: ” Where is Os?” ( Os was the big loosehead prop and his real name is Jacobus Petrus du Randt). The players enjoyed the conversations they had with the President on that day.
He supported them on the rugby field, and he embraced the victory with them. A dream came true. We won.

When the team flew with British Airways to France, the pilot welcomes the team on their way to the World Cup. He said that he wished them luck, but not against England! It was then that Butch James said: ” Ok, he wished us luck, but not good luck!”

The World Cup team announcements were in Paris. On that day, hundreds of TV cameras and journalists filled the room. At that time, Frans Steyn was the youngest player on tour. A Journalist from the BBC asked him about his thoughts on Transformation. Frans shifted in his chair and looked towards Vusi who had to save the day with an answer. Vusi told the journalists that Transformation was a policy matter best answered by the SA Rugby leadership in South Africa and not the players at a World Cup.

The homecoming moments after a tour was always exceptional for Vusi. Neighbours and friends would gather around him as he unpacked his bags, admiring the green and gold blazer and chatting non-stop about all his experiences.

Close to his house, was a guesthouse. At that time, the owner thought it very pleasant to call Vusi to meet the guests, as they loved rugby and the guests were from England. She introduced him: “ He works for the Springboks”. She did not know that just a week before, England lost to the Springboks in the Rugby World Cup Final in that fateful match! For Vusi that was a moment, to smile brightly and keep his pose.

Vusi left SA Rugby a few months after the European Tour of 2007.

On his journey, he will take the fond memories to have been part of the glory of the green and gold: Our Springbok Rugby Team.
In his own words, one thing is for sure when he looks on the menu in a restaurant: ” Never eat a Springbok – even if the meat is good!” He says that with a twinkle in his eye!